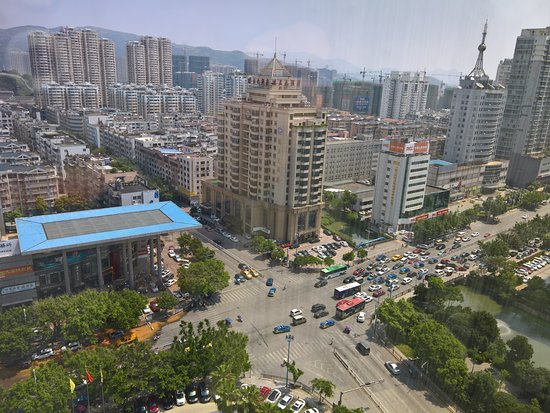 Ruiyang, aka Ruiyang and Ruiyang, is a Chinese urban county, a third-level administrative unit. It belongs to Zhejiang Province and Wenzhou Municipality, which is almost everywhere mountainous, even where it borders the East China Sea. Many of the county’s mountains are higher than 1,000 meters, yet it has managed to become quite urbanized, especially where it is washed by the waves. The administrative offices are in the Luchen district, while the urban county in question lies just a few dozen kilometers to the south. Juyang is what they call a satellite city. Notably, this urban county is the most populous in its county, with 1.4 million residents, according to the 2010 census. In terms of area, it is in third place with 1,271 square kilometers. In terms of density, it is fourth.

Juyang has long been among the economic leaders of the lands where China is located. Even before our era, it was excellent in terms of creating implements and trade. It was especially famous, like other parts of Wenzhou, for pottery, including glazed celadon. From 191 to 138 B.C. the territories of the urban district constituted the Dong-Ou kingdom, which was then absorbed by the Han dynasty. At all times, Ruyan and its neighbors were among the engines of Chinese progress, and the urban county in question is now considered an economic example.

In 1987, Ruyan became the 14th Development Zone, involved in international business. Was a pioneer of such innovations as the shareholder system. The county and county’s infrastructure has since gained a civilian airport, a train station, an expressway, and a port ranked among the 20 busiest in the country. For all the industrialization of Ruyang, it is not difficult to find quiet places like Longshan Park with its traditional architecture or the Tongxi Mountain-Lake Reserve.