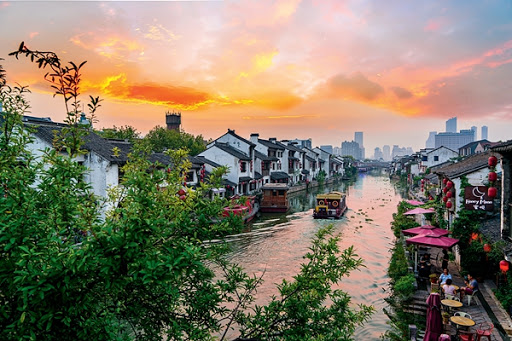 The Great Channel in the Jiangsu Lake is home to the city of Ousu, a county in eastern China. It occupies an area in the lower reaches of the Yenise River. The citys name is translated in Chinese as No tin. At one time, the city was called Yew (Quoting Tin) and the area was actively mined for natural resources.

The modern city is known as a textile center, with a fairly developed transportation infrastructure. There are fiber, silk and wool textile factories. The food industry is represented by flour, butter, butter and tea processing plants. The chemical, mechanical engineering and metallurgical industries are also developed. The tourism sector is important for the development of the city. On the coast of Taichou Island there is a resort area.

The first settlements in these areas date back 10,000 years. According to archaeological research, the city was founded in 202 AD. After the construction of the Great Channel of China under the Sue dynasty, many merchants moved to the city from northern China. As a result, in a short period of time, Xu became a significant trading center in the south of the country. During the Tánań dynasty, important caravan routes ran through the city. Many goods and merchandise, including crops, passed through the city to different destinations.

In the period of the Ming and Qing dynasties, the city was transformed into a textile, silk and rice-growing center. The beginning of the 20th century was marked by the rapid growth of the industry. By 1937, it was the countrys third-largest manufacturer of manufactured goods and the center of the art industry. Not far from the city, the largest bronze statue in the world, the statue of the Buddha, stands 88 meters high on Lignan Hill.